On the morning of 21/09/2016 at the meeting room of the Dong Nai Technology University took place the welcoming ceremony and working with the Nihon Insitute of Medicine (Japan). The International co-ordinating office takes the lead role in welcoming and running the work program. 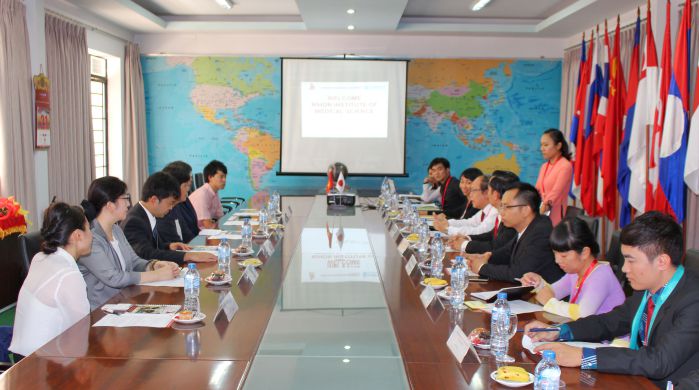 Welcoming and working with the delegation, on the side of the Dong Nai Technology University, has Dr. Tran Duc Thuan - Vice Rector, Dr. Tran Thi Quynh Le- Head of International Relations Department; Head of the Food - Nursing - Enviroment Department together with Dean, Head ò Nursing ang testing teams and a number of staff - teachers and staff of the Department Of Communication and International Relations.

At the beginning of the meeting, Dr Tran Duc Thuan expressed his pleasure of receiving and working with the delegation. Dr Tran Duc Thuan reiterated the spirit of cooperation between the two units that Dr Phan Ngoc Son - Rector of University - Came to and Worked in the past. Dr Tran Duc Thuan believes that the prospect of cooperation between the two university by DNTU and the Nihon Institute of Medicine are private educational institutions, which also include multiple levels of education, multi-disciplinary traning and the same goal for learners. Dr. Tran Duc Thuan expects the two agencies to accelerate their activities in the most collaborative framework of the nursing field that the two sides have discussed and exchanged. 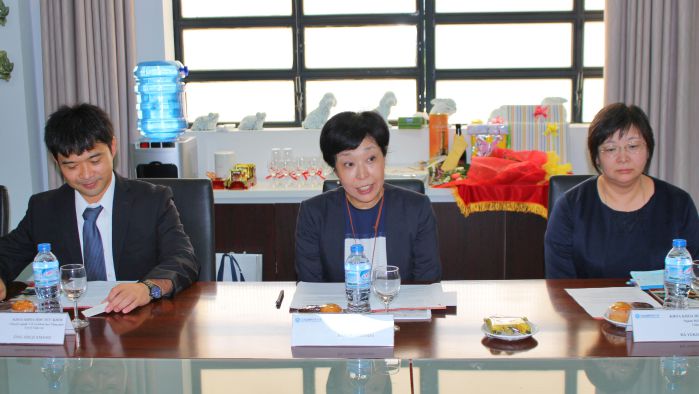 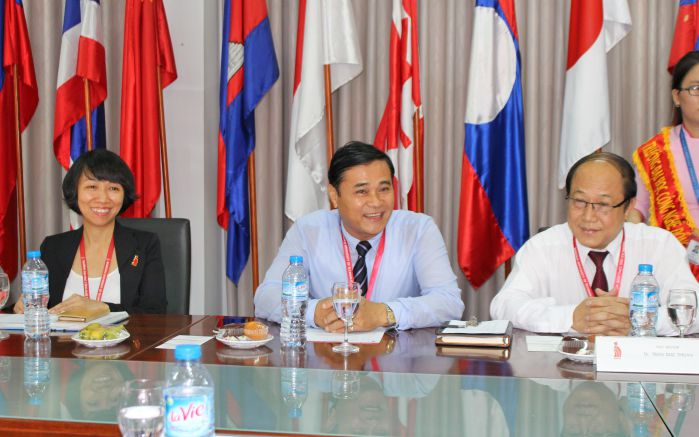 Although only appearing to greet the delegation in social etiquette, but Dr. Phan Ngoc Son - Rector of the University - also made the group very happy and touched when he repeated many stories and memories of last year trip to Nihon. On the basic, DNTU considered the people of the Nihon institute of Medicine as close family members. He said he was happy to see Nihon’s old acquaintances. Dr. Phan Ngoc Son also sent greetings and good wishes to the leaders of Nihon and expressed his desire that the two university should promote cooperative activities to bring about pratical results and benefits for learners and two units.

Dr Tran Thanh Dai, Dean of the Faculty of Food, Environment and Sanitation, said that in spite of the new school and department, The environment - nursing has the largest number of students and is very promising. This is the department that is playing a leading role in training cooperation with Nihon. Dr. Tran Thanh Dai introduced Mr. Nguyen Minh Hieu - Nursing student to present the program, the content of his study. Through the presentation of Nguyen Minh Hieu, the delegation of the Nihon Institute of Medicine understood quite well the basics in the program as well as the practice and practice conditions of students of DNTU, from which both sides will find out the solution. Remedy the weaknesses in training and open up prospects for cooperation. 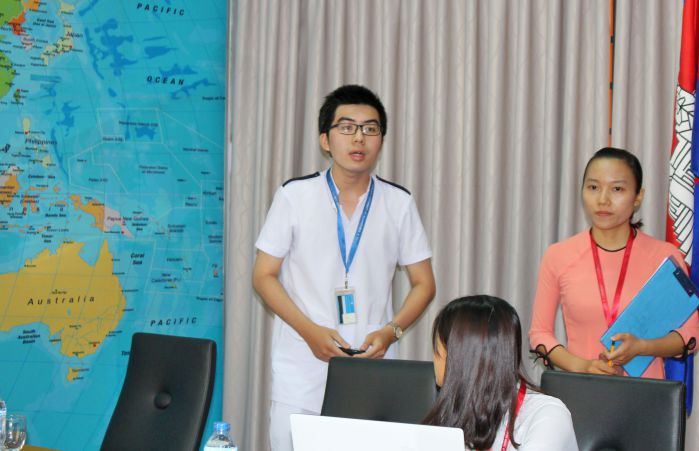 Tran Thi Anh Tuyet, a student of medicine, introduced Nihon to his field of study. Despite the language barrier, the students of DNTU have brought to the delegate the interest to know that DNTU has paid attention and invested considerably for the study of students as well as the ability to present the problem very confident, Coherence of the children. 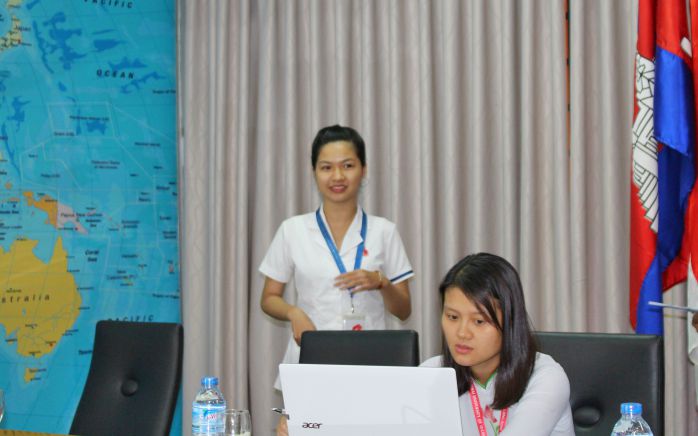 On behalf of the delegation of the Nihon Institute of Medicine, Mr. Shuji Amano introduced DNTU some highlights of the Japanese education program and the Nihon Institute of Medicine. It is possible to talk about the structure of the program and the arrangement and placement of the subjects under each year of two schools also have many common features. For example, in the first year of school, every school also learned basic subjects, not yet specialized in the field. The third year of study is the deepest in depth knowledge. The fourth year focuses on internships and graduation. However, at Nihon practice and skill are two very important factors. For example, the fourth year student has a practicum of 6 months. Therefore, the professional skills and skills of new graduates have been very good, said Mr. Shuji Amano. 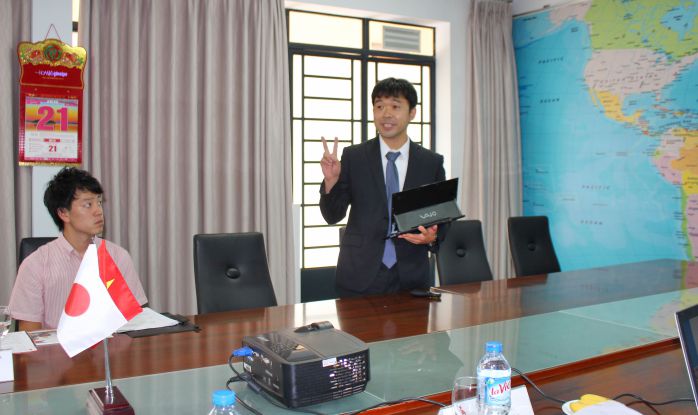 After the presentation of Shuji Amano, Yuko Oikava gave a very dramatic account of methods to reduce the pain of women in childbirth. As a health care professional, Ms. Yuko Oikava said: In Japan, almost 100% of women naturally give birth, so the problem of reducing the pain of mother in the "overwhelmed" is very seriously. And so, to relieve the pain, she introduced a variety of methods such as massage, acupressure, using natural aroma, foot bath in hot water, breathing regulator, lying position, sitting ... 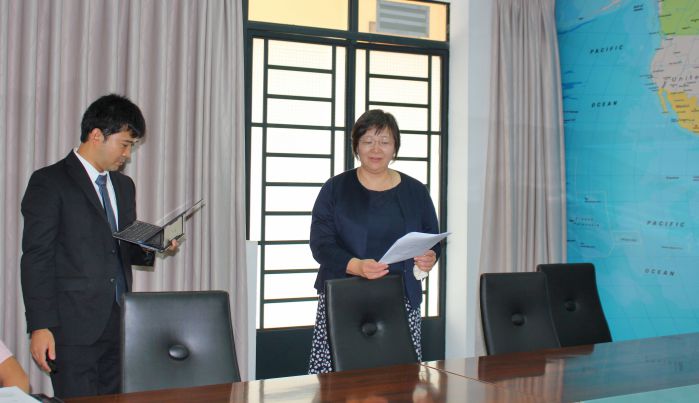 In particular, they pay special attention to mental stability and psychological issues for women as well as respect the decision of the mother when choosing the circumstances and conditions for childbirth. Very rarely, the Japanese choose the form of caesarean section. Only in the case of extreme difficulties in the elderly or when the life of the baby is seriously threatened to use this method. The benefits of natural birth we know very well. Does a Japanese woman choose a natural birth way? It is also a way of expressing human affection in the most glorious pain.

Two students, Nao Hachiya and Hiroya Akabane, gave the teachers in DNTU and a pleasant afternoon a young poet's work by exposing the problem innocently and convincing evidence through the image of age. Your poems and years are over. Accordingly, the children were vividly narrated about the school and the grades from kindergarten to high school in Japan. Thereby we also know that high school (high school) is compulsory in Japan and that high school graduates are based on ability, passion and interest. Nao Hachiya said she pursued her dream of becoming a midwife while Hiroya Akabane, a Tokyo-born teenager, wanted to go on a motorcycle and want to become a nurse. They do not see the problem of choosing a career on the basis of making a lot of money after graduation. That is also something to think about. 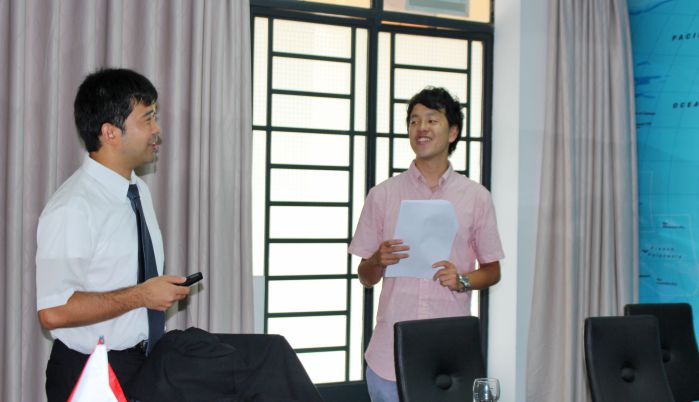 On the sidelines of the meeting, we asked Akabane if he liked to ride on a motorcycle so he would like to race. Akabane answered immediately: love it. (Perhaps Hiroya Akabane just thought of the word "racing" in the concept of speed, but did not understand the implications of illegal racing in the youth in Vietnam that we are kidding.) Nao Hachiya when asked the secret To share with students of DNTU about learning well, he said: is learning and practice a lot. Average daily 14 hours and more. How new or intense and the working spirit of the Japanese people. If we are as passionate and passionate as them, how about you DNTU students? 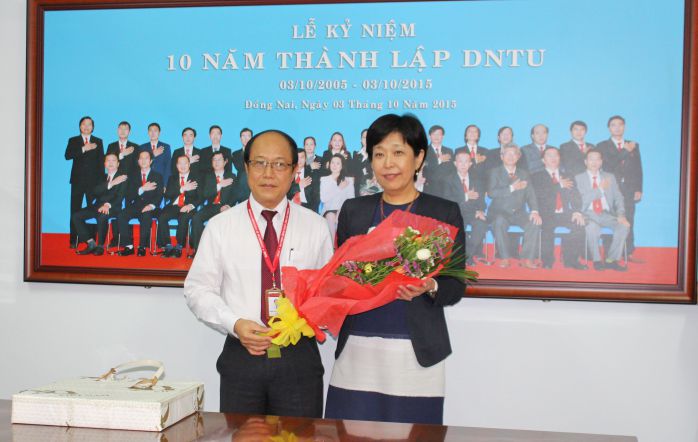 Finishing the morning work, both sides took pictures and presented souvenirs. In the afternoon, the delegation started to visit some hospitals and health care facilities that students regularly practice, practice. Hopefully in the future, many of the DNTU students will come to cherry blossom country - and vice versa - so that the training effectiveness and love between the two schools and the two ethnic groups will be stronger and stronger.